Tony (Ruggero Miti) is a troubled young man. Specifically, he’s a catatonic pyromaniac. Yep, he’s a fire starter… twisted fire starter. His problems began in boyhood apparently, when his Mom Mudy (Maud Belleroche) let him attend one of  her acid parties, where his synapses were duly blown. Mudy’s ideas haven’t got any less radical with the passage of time. Poo-poohing the advice of square psychiatrists, she decides that now her son’s a man, his recovery would be best effected by taking him on a sex cruise around the Greek islands with her decadent pals Aldo (Maurizio Bonuglia) and Paola (Rosalba Neri), plus the conniving Ulla (Edwige Fenech in one of her very earliest film roles), whom they’ve employed for the precise purpose of popping Tony’s catatonic cherry. “This boat is loaded with whores!” observes Mudy, diplomatically. When they’re not shagging anything that moves, her decadent hipsters friends are planning how they can defraud Mudy out of her oil inheritance. Oh, and Paola has a penchant for playing with lighted sticks of dynamite… what could possibly go wrong, huh?

The boat bound bacchanal is proceeding full steam ahead as we join this sordid saga, with Neri prowling around the deck in her PVC bikini, lobbing live explosives into the sea to the aural accompaniment of Sante Maria Romitelli’s delightfully cheesy sexadelic score. “This is really turning me on!” she enthuses to Aldo and for a second there I was seriously wondering if Austin Powers was going to join the dramatis personae. Instead, buffoonish Greek shepherd Andro (Salvatore Puntillo) and his beautiful bumpkin of a wife, Beba (Ewa Thulin) are piped on board to ensure that the possible permutations of couplings and tripling become even more intricate and potentially explosive… all under the watchful gaze of Mudi who, anticipating Celebrity Big Brother, has thoughtfully installed CCTV in every cabin so that she doesn’t miss a trick or indeed a fuck. Nor indeed will you, dear reader, feel remotely short changed in the smut department as you relish the opportunity to oggle Fenech nekkid and appreciate Thulin’s skin, not to mention Neri’s furry bits.

When our jaded swingers have exhausted the possibilities of human interaction, Aldo photographs Ulla suckling a goat… I said suckling, OK? (Reminds me of a joke Jim Morrison told in Miami, shortly before he got arrested.) It’s even suggested, albeit very tastefully, that the goat orally pleasures Ulla… hang on, can such shenanigans ever be reconciled with the concept of “tastefulness”? It’s difficult to say… with his, er, singular direction of this astonishing motion picture, Ottavio Alessi has ripped a vortex in the cinematic continuum, taking us to a strange new plateau where moralists, cineastes and cunning linguists fear to tread. Or something. BTW, that little goat grew up to be… Satan!

After strangling Beba, Tony explicitly acknowledges his incestuous relationship with his mother (I reckon this guy would get on very well with Michael from Nights Of Terror / Burial Ground) before strangling her too. The boat is sailing on regardless as we reach the 90 minutes mark and events are arbitrarily wound up. There’s an alternative ending (included as an extra here) in which we get the benefit of Tony’s bonkers internal ruminations for a minute or so before the boat resumes sailing on regardless. What is Alessi trying to tell us? That free love has a downside? Well, paying for it also has a down side so what, exactly, is his point? Both endings feature a hypocritical quote from The Book Of Ecclesiastes to the effect that your sins will find you out. As if to prove his point, Alessi never directed again after this crackpot concoction of Gilligan’s Isle and Bouquet Of Barbed Wire, his sophomore effort. Shameless have appended their own final caption, reassuring us that “No goats were molested in the making of this film.” Phew, that’s a relief…

In the main bonus item here, the featurette Of Boats And Goats, Neri remembers that Alessi was so unsure of himself on set, he relied upon her to the extent that she got her first and only credit as assistant director. It’s great to see Neri looking so well and reminiscing so happily about this film and her fellow cast members. Ditto Salvatore Puntillo, who reminds us of his distinguished stage career but leaves us in little doubt that his stint as the meat in a Fenech / Neri sandwich remains a personal and professional highlight.

Just when you thought they’d been a bit quiet recently, Shameless hit the ball out of the park with this extended exercise in nautical naughtiness. Sure it’s panned, scanned and to varying degrees scuzzy-looking (certain restored scenes of exposition and dialogue look a bit crap and Edwige’s goat-lovin’ moments especially so) but you know you’ve gotta have it! And Michele Soavi’s The Church and The Sect are on the way… yeeh and indeed, haw! 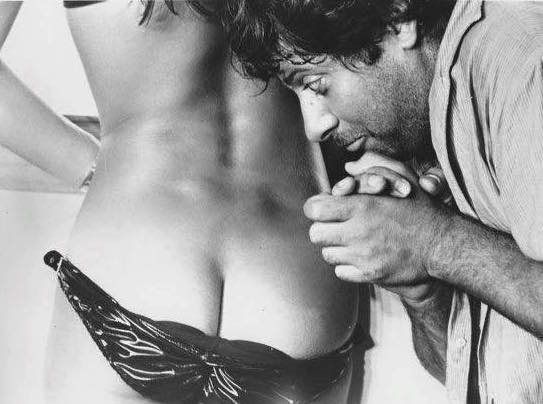 An ultra-rare still from the entirely imaginary sequel Bottom Sensation.