As already mentioned in this month’s Scalarama postings, there was a time in the ’80s when I would think nothing of catching a train from Liverpool to London, doing a spot of shopping in Forbidden Planet, stopping up all night in a shabby Scala seat to catch a 4 am screening of Four Flies On Grey Velvet then returning on the milk train to Lime Street… eloquent testimony to both the lure of The Scala and the 40 year unavailability of Dario Argento’s third giallo (not to mention how much more disposable income and motivation I had in those days!) You kids don’t know you’re bloody born, with your deluxe Blu-ray collectors’ editions! Speaking of which…

If The Cat O’Nine Tails (1971) was evidence of Argento’s growing self-assurance his follow-up, the same year’s Quattro Mosche Di Velluto Grigio / Four Flies On Grey Velvet testifies eloquently to his emerging genius. Its dazzling title sequence intercuts an overhead view of a drum solo with closeups of a beating heart, a brilliantly chosen image with which to simultaneously express Argento’s central and interconnecting themes – time, love and mortality. Thereafter we are plunged straight into violence: Gleefully confounding our expectations, Argento has the menacing figure based on Cameron Mitchell’s heavy in Blood And Black Lace apparently killed by the character he’s been stalking, rock drummer Roberto Tobias (Michael Brandon) who tracks him down to a derelict theatre.

All this is photographed by a mysterious masked figure in the balcony, and the guilt-stricken Tobias, who already has to contend with the breakdown of his relationship with his wife Nina (another touchingly fragile performance from Mimsy Farmer) is now plagued by photographs of the incident turning up at his house – no wonder he suffers from a recurring nightmare of decapitation.

His housekeeper works out what is going on and arranges a meeting with the blackmailer in a local park, only to be stalked through its topiary after closing time and stabbed to death in a maze. At this point Tobias enlists the aid of a gay private eye, a deft comic performance from Jean Pierre Marielle as the ineffective detective who fares no better than the housekeeper… after a chase on the underground he confronts the blackmailer, who promptly beats him over the head and injects curare directly into his heart.

As his entrapment deepens, Roberto seeks consolation in an affair with his wife’s friend Delia (Francine Racette), who predictably is soon pushed down a flight of stairs and stabbed to death. The police’s forensic division use one of the dead girl’s eyeballs in an experiment, passing a laser beam through it in the hope that the last thing she saw can be reproduced as a photographic image (that old chestnut pseudo forensic chestnut) and provide a clue to the identity of her killer. The resulting image is meaningless, the titular “four flies on grey velvet.” Things are looking bad for Roberto, but out the blue the significance of this image announces itself… then things look even worse as he finds himself at the mercy of his tormentor. He is shot twice but just as the killer is about to deliver the coup-de-grace, one of the drum’s eccentric friends appears and saves the day. The killer jumps into a car and drives away, only to crash into the back of a truck, and Roberto’s ongoing premonitions of decapitation are shockingly fulfilled… 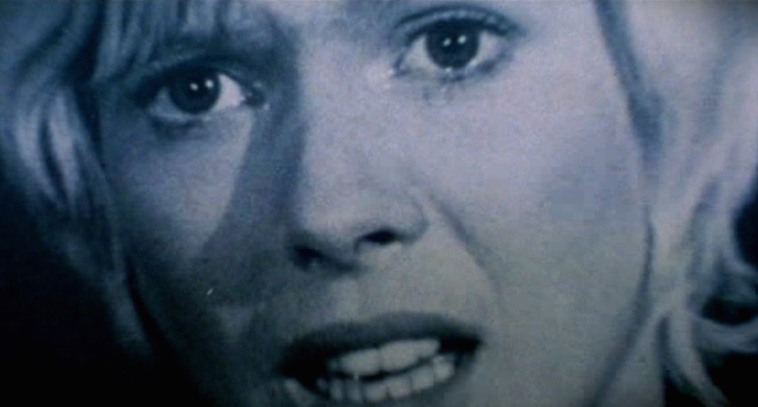 Argento had recourse to extra high-tech equipment for FFOGV and technological innovation also features as a plot device (noted Italian SF specialist-Luigi directed second unit and also had a hand in writing the film’s story.) Paradoxically, Four Flies is the director’s warmest, most human film – transcending mere gimmickry, Argento uses his technical bag of tricks to cut straight to the heart of the human condition. By a masterful manipulation of screen time he illuminates the plight of those for who present is a constant re-working of past traumas. The titular clue is quintessential Argento, an audacious visual representation of a dead moment from the past, lovingly conserved and cultivated in the mind of a psychopath until it can swing again into violent life. There is no room for any concept of free will in this scheme of things and Argento goes to extraordinary lengths to comment on his fatalism – the classical device “Deus ex machina” is used at the climax of many of his  films but here Tobias is saved by the intercession of a god very much present in the machine, Bud Spencer as “Dio” who is introduced by a burst of The Hallelujah Chorus on the soundtrack, a nod to the Spaghetti Westerns in which Argento got his script-writing break.

In another spot of dues-paying the director gives Tobias an address on Fritz Lang Street! Clearly Argento is in a playful mood – he even manages an affectionate sex scene, touchingly played by Brandon and Racette, which brings the emotionally shrivelled life of the killer into sharper relief. Similarly, a jokey visit to an exhibition of funeral accessories where one of the tacky exhibits is a coffin car, serves as a comic pre-echo of the film’s shattering conclusion, where Argento scales the heights of tragedy. Using a camera that shoots (by his reckoning) up to  25,000 frames per second, Argento elongates the final seconds in the present of a character whose life has been lived almost exclusively in the past. His minutely-detailed slow motion dissection of this terrible moment either sadistic, nor voyeuristic, but ultimately compassionate. Enhanced by Ennio Morricone’s most haunting theme (at times the marriage of visuals and music in FFOGV approaches what he achieved in tandem with Sergio Leone) this profoundly moving moment leaves the viewer emotionally drained but wishing that he could sit down and watch the whole thing all over again (though for decades seeing it at all was some feat.) By tugging on the strings of time Argento has wrought a work of staggering complexity and resonance in which each part refers to every other part and to the whole. Nic Roeg’s feted Don’t Look Now, which aspired to something similar (a full two years later), comes across as positively simple-minded in comparison.

From about 2010 0nwards a succession of official looking releases turned out to be little more than tricked-up bootlegs, finally put by right by Shameless in early 2012. This one is Argento-approved and optically fixes a screen glitch (caused by the film jumping the high speed camera gate) that has detracted from the film’s shattering climax in every previous small and big screen release. Visual and aural elements have been beautifully remastered, four elusive pieces of footage can now be viewed (in standard definition) as either isolated extras or in situ, Luigi Cozzi introduces and talks about the making of the film, you get alternative English titles and credits plus the expected trailers…

… talk about well worth waiting for!