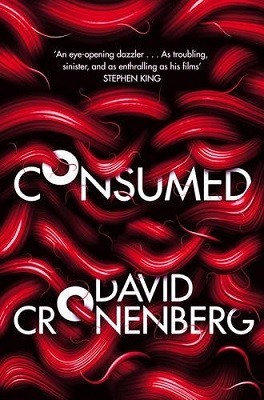 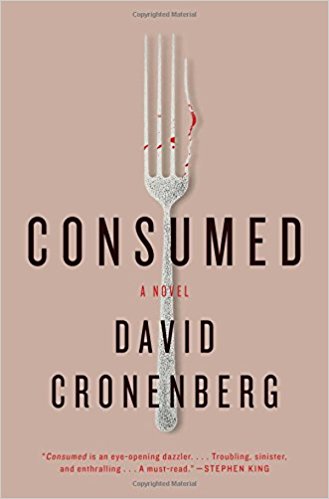 The cover boasts a generous testimonial from Stephen King, no less, identifying Consumed as “an eye-opening dazzler… as troubling, sinister and enthralling as (Cronenberg’s) films”. I’d go along with the latter part of that quote, while qualifying my assent with the observation that it’s been quite some considerable time since any Cronenberg film has troubled, enthralled or dazzled me.

Like a lot of other people, I found myself fascinated by Shivers (1975), Rabid (1977), The Brood (1979) and Scanners (1981), while wondering when Cronenberg was going to hitch his undoubted fierce intelligence and the maverick morbidity of his imagination to some kind of coherent narrative sensibility. In 1983 he veered between extremes… his genuinely troubling, sinister and enthralling Videodrome (a hi-concept hallucinatory gore-fest, unencumbered by anything so mundane as a storyline that stood up to cursory scrutiny) was followed in rapid succession by The Dead Zone, which benefited from the narrative discipline of Stephen King’s source novel (and presumably the commercial discipline demanded by heavyweight producer Dino Di Laurentiis) but uncharacteristically side-stepped the brain tumour imagery that King himself employed in the book and with which one might well have expected Cronenberg to have a field day. He finally managed (again under the influence of a heavyweight producer, in this case Mel Brooks) the long-awaited synthesis with The Fly (1986), the perfect Cronenberg picture and a tremendous film by any yardstick. I didn’t have long to savour that before the director and I definitively parted company…

… the rock on which we foundered was Naked Lunch (1991). Given that William Burroughs’ stated intention for his 1959 act of literary terrorism was to upgrade The Novel’s arsenal of narrative techniques to the point where they matched those of Cinema, the point of adapting it to the big screen was always going to be, at best, a moot one. Still, I couldn’t help but wonder how Cronenberg was going to render the moral and literary complexities of a book that had been horrifying and tantalising me in equal parts for decades. Well, there was some nonsense about “sexual ambulances”, then Roy Scheider ripping off a Mission Impossible-style latex mask to announce himself as Dr Benway (ta-da!) Oh dear… we’d been giving Cronenberg credit for his intelligence all these years and now he was repaying us by insulting ours. I never felt the inclination to seek out any Cronenberg pictures after this and those I did find myself accidentally exposed to on TV did nothing to convince me that I was missing much.

DC got my attention again with Consumed, which I picked up in a remainders shop three years after its initial publication in 2014. This time he’s attempting the reverse trick of rendering that Cronenberg sensibility via the printed page. So you won’t be at all surprised to discover within it a bunch of preposterously-named characters, travelling the world to have sex with celebrity cannibal intellectuals, contracting hitherto unguessed at venereal diseases and seeking out the assistance of a VD professional whose daughter is herself engrossed in a drawn-out process of auto-cannibalism. The protagonists’ lovingly chronicled hi-tech communication appurtenances only serve to further alienate them from each other, in the style of J.G. Ballard characters… irresponsible avant-garde surgeons slice their way merrily through human tissue that is, apparently, on the verge of collapsing into unspeakable insect horrors (still can’t resist a bit of Burroughs, ol’ Dave) and as for Dick… there’s plenty of dick herein – much of it diseased and deformed – and Philip K. even gets a personal name check on page 227. At several points Cronenberg seems determined, for some reason, to shoe-horn Samuel Beckett into the mix, too (that whirring sound you  hear might just be the irascible Irish minimalist rotating in his grave). 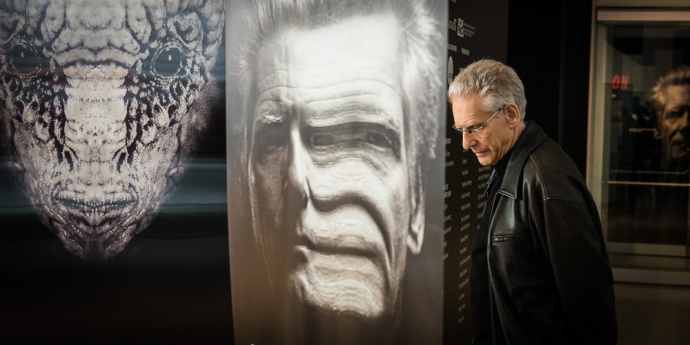 Now, wearing your literary loves so brazenly on your sleeve isn’t necessarily such a bad thing. Will Self and Martin Amis, among others, have done very nicely for themselves by, er, channeling the influence of some of the above-mentioned writers. What’s more, Cronenberg is an accomplished and assiduous pasticher… this is, after its own wilful fashion, well written stuff. It’s just that after the sound, fury, calculated unpleasantness, deliberate ennui and all the rest of it, the reader gratefully lays Consumed down with an overwhelming sense of: “So what?” Charlie Brooker covers this beat with so much more wit and emotional resonance. Presumably intended to hit with the impact of some mortifying cancer or exotic new STI, Cronenberg’s novel registers merely at the level of an irritating head cold. Ironically, when I tackled Consumed I was too depleted by flu to abandon it in favour of more rewarding activity, e.g. surfing the TV for old episodes of Quincy ME.

Having previously discussed with the late, great Joe D’Amato the debt that Videodrome might or might not owe to his Emanuelle In America, I was intrigued to find Cronenberg naming this novel’s outlaw lifestyle philosopher, who might or might not have eaten his girlfriend’s brain, “Aristide”. As I struggled to finish Consumed, I kept consoling myself with the prospect that this character might just be about to rip off one of those Mission Impossible masks, revealing himself to be none other than jolly Uncle Joe… but (spoiler alert) no such luck.