Not all Extra Terrestrials were as friendly as E.T. … nor were any of them remotely as financially successful. Back in 1982, Stephen Spielberg’s touchy-feely encounter of the mawkish kind wiped the box office floor with such superior downbeat contenders as Ridley Scott’s Blade Runner and John Carpenter’s The Thing, so what chance did a low-budget, Anglo-American Alien wannabe directed (and scored) by the obscure Harry Bromley Davenport (whose only previous feature was Whispers Of Fear from 1976) stand?

Precious little, probably, when its own director dismisses “the dreaded Xtro” (his own words) as “an extraordinary mess”.  Cooked up between HBD, producer Mark Forstater and New Line honcho Bob Shaye as some kind of UK answer to the surreal non sequitur horrors of Don Coscarelli’s Phantasm (1979), hyped on its eventual release as the dark mirror image of Spielberg’s box office champ (with heavy Alien overtones), Xtro is indeed a mess, albeit a very, very enjoyable one. Davenport has also described his little opus as “pointless… completely ludicrous… rubbish…. awful and reprehensible” but I’d characterise it rather as a Poundland restaging of The Man Who Fell To Earth (1976)… and I mean that as a compliment! In fact if I may be so bold, Xtro’s queasy quasi-Oedipal undercurrents and sci-fi slant on dysfunctional family life ultimately place it considerably closer to Andrzej Zulawski’s Possession (1981) than Ed Wood’s Plan 9 From Outer Space (1959).

The film’s opening sequence  goes right back to the source of all that touchy-feely alien hugging nonsense, Kubrick’s 2001 (1968) and reinvents its famous “flying-bone-into-spacecraft” segue for the abduction of protagonist Sam (Phil Sayer), whose subsequent return to Earth kicks off a series of highly improbable and improbably grisly events (“The idea was to do the most disgusting things that we could possibly get away with… we just wanted to shock people” admits Harry somewhere during the supplementary materials). Having boned up on alien obstetrics according to Ridley Scott, HBD presents us with the rape of “woman in cottage” (the ever lovely Susie Silvey) by slithery, sub-Gigeresque genitalia after which, in a wince inducing scene, she gives birth to a full-grown Sam.

His wife Rachel (Bernice Stegers) has very mixed feelings about Sam’s reappearance, as during his absence she has set up home with photographer Joe (Danny Brainin). Scrumptious au pair Analise (Maryam D’Abo) is also sceptical, but at least Sam’s son Tony (Simon Nash) is glad to have him back. Sam cements Tony’s loyalty by passing on some alien powers (in another icky scene that involves neck-sucking and Cronenbergesque bladder eruptions) and soon the lad is bringing his toy clown and action man to life, to kill the interfering old biddy from downstairs (Anna Wing, who must have been particularly grateful when East Enders came along) and conniving in the transformation of Analise into a mummified alien egg breeder. Apropos of nothing (aside from Shaye’s insistence), a black panther prowls the house at random moments… 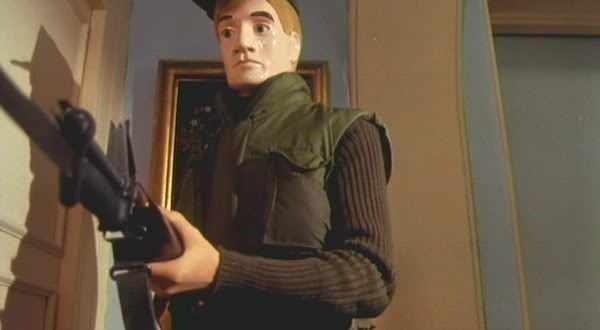 Finally, after various other folks have been messily dispatched, Sam reverts to a monstrous metallic insect man and whisks Tony off in his space ship for a new life, God knows where.

Davenport, as he freely admits, was blessed with a fine cast who never so much as hint in their performances that they consider this outré material beneath them. Admittedly Maryam D’Abo, for whom Xtro represents her feature debut and who suffers from a bit of a wobbly accent, later wrote it out of her filmography. Indeed, on becoming a Bond girl (The Living Daylights, 1987) she declared to the press that she had never done and would never do full frontal nude scenes. Xtro provides conclusive and rather delicious evidence to the contrary.

Phil Sayer (now the late Phil Sayer, sadly) generates genuine pathos in his role as the dislocated dad. Bernice Stegers, whose CV also boasts Fellini’s City Of Women and her husband’s Four Weddings And A Funeral, brings credence and therefore credibility to anything in which she appears, witness her compelling turn in Lamberto Bava’s magnificently overwrought 1980 effort Macabro (below) and here. Regrettably, on the night when Mrs F and I once found ourselves sitting at the next table to Stegers in the now defunct Old Orleans restaurant on the bridge in York, my better half dissuaded me from approaching her on the grounds that I’d spoil the poor woman’s dinner if I reminded her of “all the terrible films she’s been in”. Speaking of spoiled dinners, I later threw up my chowder… bit of a washout all round, that evening was. It’s especially galling to learn from Stegers’ appearances in the bonus materials on this set that she’s rather tickled when people engage her in conversation about Xtro…

“… just don’t ask me about that bloody Macabro thing!”

Once liable for confiscation under Section 3 of The Obscene Publications Act back in those dark draconian days of the early ’80s, Xtro’s BD debut comes with a ’15’ certificate and laden with extras, mostly courtesy of them Nucleus boys, that are almost as entertaining as the feature itself. “There was this awful period of the ‘video nasties’…” reflects Davenport in the archive feature Xtro Exposed: “ … an awful British phrase, it has a lot English pettiness about it”. Too true, Harry… though the twitchy director can’t resist enthusing about the news report on a psycho killer which featured close-ups of Xtro prominently displayed in his voluminous  video collection (“You can’t do better than that, really… sales went through the roof!”)

In the more up-to-date Xploring Xtro, Jake and Mark have assembled most of the surviving participants and various interested parties, including Tik & Tok, reminiscing about their robotic and alien contortions and Robert Pereno reprising his immortal “Stay in the car”! line. Maryam D’Abo continues to maintain her distance from the project and although I know Jake and Marc tried hard to identify the current whereabouts of Simon Nash, their efforts ultimately proved unsuccessful. In his absence, other participants comment cattily on his crap acting and how much weight he put on during the shoot (more on that later).

In The World Of Xtro we are introduced to Mr Dennis “Xtro” Atherton (just for a second there I thought we were going to get Andrew “Xtro” Featherstone), an über-obsessive fan of the film who views it as a Bergmanesque family drama with added space aliens and has more cock-eyed theories about it than any of the Shining devotees showcased in Rodney Ascher’s Room 327 could ever muster regarding Kubrick’s film. My favourite among Dennis’s many obsessive observations is the one concerning the magical confluence of Xtro’s length (83 minutes) and year of release (1983)… actually it was released in 1982 and seems to last 84 minutes, but I can’t bring myself to hold this against the likeable Mr Xtro Atherton.

What’s at the root of this singular obsession? Our man reveals that D’Abo’s nude scenes made a big impression on him as a pubertal youth… I bet they did, in fact they remain in my all time top three of female nude scenes in mainstream movies (Elizabeth McGovern in Ragtime, 1981 and Annette O’Toole in Cat People, 1982… thanks for asking). Wonder how good Maryam, who must be nearly 60 now, looks nekkid these days… way better than I do (below), no doubt.

Xtro’s two existing (semi) sequels are glossed over, but the really big news is that HBD and Mark Forstater are reuniting for Xtro – The Big One (I kid you not), wherein a fourth Xtro incursion will coincide with a massive LA earthquake. We get to see some CGI-heavy test footage from that. There’s also a video tribute to Phil Sayer (incorporating the song Brian May wrote about him)…

… and of course the disc contains four (count ’em) different versions of the original feature, including two distinct endings, the British video release and Harry’s 2018 re-polish which, he freely admits, might have made the film look worse rather than improved it in any way. In fact the high contrast look of Xtro redux gives it more of  a comic book look than anything else, which I guess is quite appropriate for its subject matter. Intriguingly, Harry has also digitally thinned out the face of the much maligned Simon Nash but regrettably, we never get to hear Dennis Atherton’s pronouncements on the profound significance of this particular tweaking. 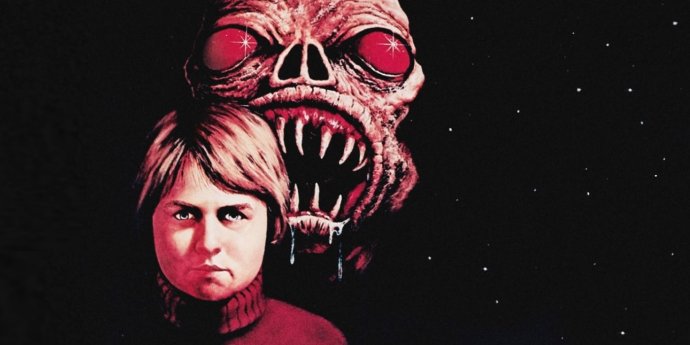