Zest Of A Salesman… WILLIAM CASTLE AT COLUMBIA Volume 1, Reviewed 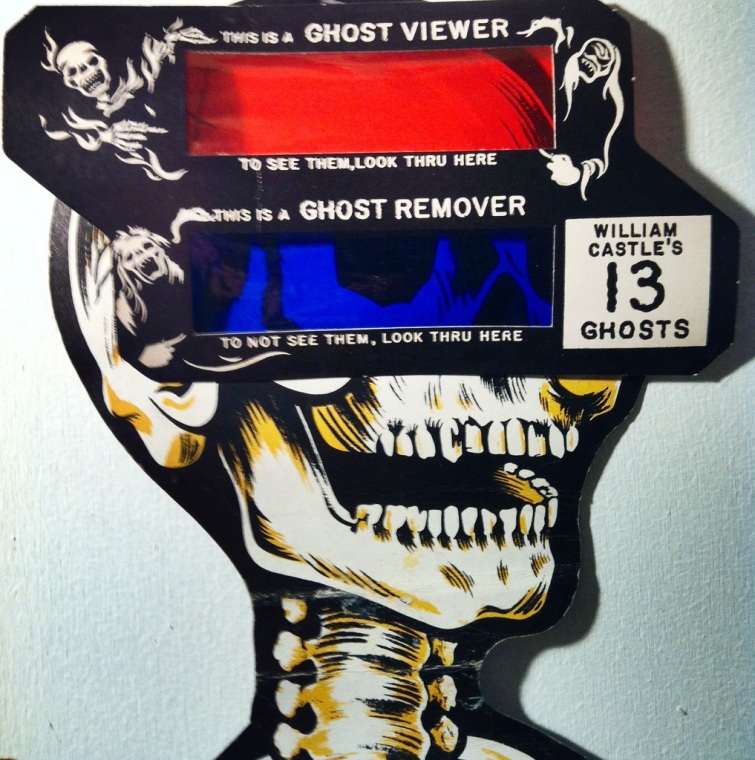 Although he longed for recognition as a serious director of quality Cinema (and nearly attained it in 1968, before Roman Polanski replaced him as director of Rosemary’s Baby), William Castle knew in his heart of hearts that he was no Hitchcock. If he couldn’t outshine his idol on the silver screen however, he resolved to do outdo him as a showman… and boy, did he ever succeed! After about a decade-and-a-half as a hired B-movie director for hire, working on crime pictures and Westerns (including the 3-D Fort Ti in 1953) our man formed William Castle Productions to make Macabre in 1958 and The House On Haunted Hill the following year.

The first named of those is a routine “race against time to rescue a girl who’s been buried alive” thriller, best remembered for the piece of promotional hokum by which Castle insured every ticket buyer with Lloyd’s of London, to the tune of $1,000, against the eventuality of them dying of fright while watching the movie. Nurses were posted in cinema lobbies and hearses parked outside.

All very jolly, but Castle’s Barnum-esque antics were ramped up exponentially for House On Haunted Hill (in which jaded patrician Vincent Price bets an ill-assorted cast of characters that they can’t survive a night in his doomed domicile) by the introduction of the “Emergo” process, which purported to surpass 3-D by having ghosts emerge from the screen… in fact it consisted of a joke shop skeleton advancing shakily over the viewers’ heads on a rail. 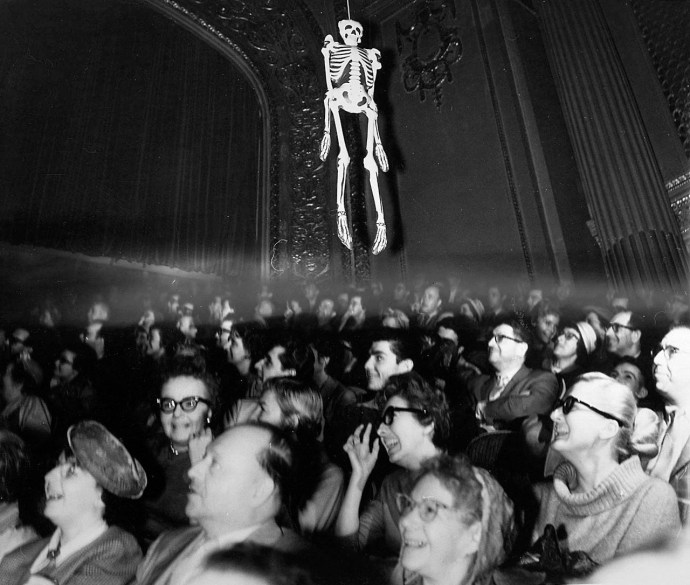 Impressed by Castle’s sheer chutzpah and the commercial success generated by such shenanigans, Columbia signed the director for a series of pictures, the first four of which comprise Indicator’s marvellous William Castle At Columbia, Volume 1 box set. Price returned for The Tingler (1959) as Dr. Warren Chapin, who discovers that intense fear produces a lobster-like critter (which he dubs “The Tingler”) in the human spine, which is killed off when the terrified individual screams. Chapin demonstrates his scientific dedication by dropping acid (in what is widely believed to be the first LSD reference in Cinema) with the specific intention of suffering a bummer, all the better to tickle his Tingler (Price’s “bad trip” acting is a predictable hoot). When a deaf-mute character dies of fright without neutralising hers (under circumstances that suggest the all-pervasive contemporary influence of Clouzot’s Les Diaboliques, 1955) Chapin removes it surgically, only for the beasty to escape to the adjacent cinema (show me a cutting edge neurosurgeon who doesn’t ply his trade next door to a movie theatre!), setting up what is arguably the greatest fourth wall-shattering moment in Schlock Cinema History. The movie the theatre patrons are watching breaks down and the silhouette of the titular monster on-screen is followed by a plunge into darkness and Price urging the audience (and us) not to panic, but to “scream… scream for your lives!”

To compound viewer hysteria as The Tingler traversed the aisles, selected cinema seats were wired to vibrate and impart an appropriate tingling sensation to random lucky punters’ butts, a marketing coup dubbed “Percepto” by the tirelessly, dementedly inventive director.

Castle continued to refine his search for the ultimate audience interactive experience with 13 Ghosts (1960) in which a down-on-their-luck family inherit a mansion from their eccentric uncle, only to find that it’s haunted by 12 ghosts with gristly back stories… with the ominous implication that one of the family is going to die and become the thirteenth ghost. By the miracle of bullshit gimmick “Illusion-O”, viewers were able to opt, via the stereoscopic viewing cards with which they were issued on the way in, to see or avoid the eponymous ghosts (like anybody was going to pay to get in and then not want to see the ghosts!)

Not content with accompanying his films on promotional tours, playing an active part in his own fan club and appearing in trailers, Castle was now boosting his brand by popping up in the main features themselves, introducing the stories and demonstrating to viewers how best to participate in each film’s interactive gimmick. Hitchcock himself was taking notice of Castle’s low-budget, high hype strategy (consider the celebrated trailer for Psycho, 1960… indeed, the very existence of Psycho) though Castle returned the favour in characteristically on-the-nose fashion with Homicidal (1961). 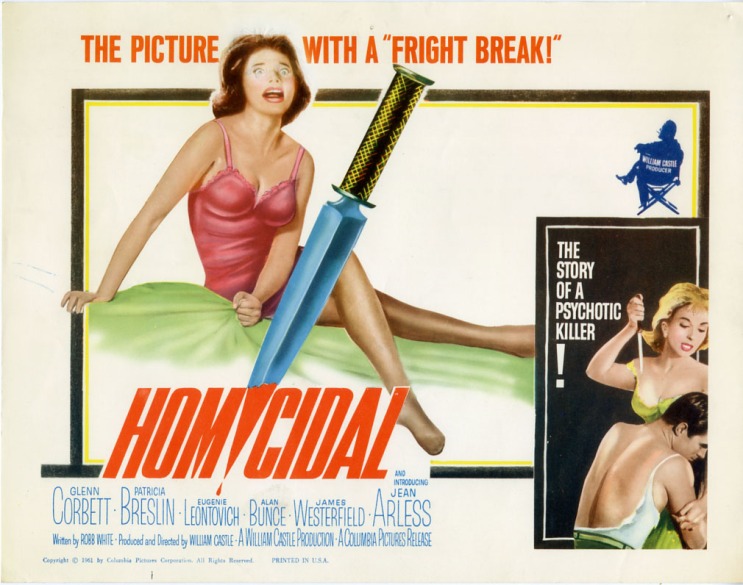 Quick off the blocks, Homicidal opens with a bride stabbing the JP to death during her wedding ceremony and progresses to inheritance intrigue and conspicuous gender-bending before the proceedings are wrapped up with WC’s wildest gimmick yet. “Castle simply went nuts…” as John Waters has it in his book Crackpot: “He came up with Coward’s Corner, a yellow cardboard booth, manned by a bewildered theatre employee in the lobby. When the Fright Break was announced, and you found that you couldn’t take it anymore, you had to leave your seat and, in front of the entire audience, follow yellow footsteps up the aisle, bathed in a yellow light. Before you reached Coward’s Corner, you crossed yellow lines with the stencilled message ‘Cowards Keep Walking’. You passed a nurse… who would offer a blood-pressure test. All the while a recording was blaring: ‘Watch the chicken! Watch him shiver in Coward’s Corner!’ As the audience howled, you had to go through one final indignity… at Coward’s Corner you were forced to sign a yellow card stating: ‘I am a bona fide coward’.”

Notoriously stingy, Castle always couched his refund offers in terms that audience members would be reluctant to take up and the same tight-fistedness would also be apparent when it came to filming the alleged alternative endings for Mr Sardonicus (1961). An uncharacteristic period picture with Gothic leanings, this one recounts the outrageous exploits of its libertine title character (Guy Rolfe)… digging up his father’s corpse, trussing attractive young women up and applying leeches to then (interestingly foreshadowing the onscreen exploits of Brazil’s Coffin Joe, who first came to the world’s astonished attention in At Midnight I’ll Take Your Soul, three years later) and do on. On account of his desperate misdeeds, Mr S develops a grotesque rictus grin so fixed that ultimately it prevents him from eating or drinking (sure thing… whatever…) At this point the director appears onscreen to count the audience’s votes, as registered via the “thumbs up / down” cue cards that they were issued with on entry, this “Punishment Poll” deciding whether Sardonicus died or was cured of his affliction. Knowing full well that nobody was ever going to vote for the latter, Castle didn’t waste a cent on shooting more than one ending.

Even if you’ve never had the good fortune to see these movies, the above descriptions have hopefully clued you in on exactly how much fun you ‘re going to have with them. Each is presented here with gimmicks intact (their on-screen components, anyway… you’ll have to rig your own sofa to vibrate and knock up your own Coward’s Corner somewhere in your living room), what’s more this set is appropriately equipped with a host of cherishable extras… audio commentaries, interviews, featurettes, archive promotional footage, trailers (with commentaries), isolated music and sound FX tracks and appreciations from the likes of Jonathan Rigby, Stephen Laws and Kim Newman (who points out that even in his autobiography, Castle had more to say about the wiring of cinema seats for The Tingler than about that film’s astonishing content).

Best of all, this set includes Jeffrey Schwarz’s 2007 feature-length bio documentary Spine Tingler! The William Castle Story, a visually inventive celebration of this showman nonpareil with contributions from his daughter Terry and the likes of Roger Corman, Joe Dante, Forrest J. Ackerman and John Waters, who was instrumental in getting this project off the ground. You also get a short featurette on the making of Spinechiller! and, just to prove that these Indicator people are nothing if not thorough, the latter comes with its own commentary track. Interesting (and a little troubling) to learn that in his pre-cinema days as a theatre impresario, Castle was not above faking up Nazi desecrations to put more bums on seats. Nor does the doc shy away from Castle’s darker final years, when the once-cynical purveyor of schlock horror came to believe that his production of Rosemary’s Baby had unleashed genuine bad karma on some of its participants.

Limited to 6,000 numbered copies, this special edition of William Castle At Columbia comes with exclusive booklets (which I haven’t seen) boasting new essays and archival materials. Volume 2 will join it in December… assuming you’re brave enough to remain in your seats for that!