Beating The Bishop… MAGDALENA – POSSESSED BY THE DEVIL Reviewed 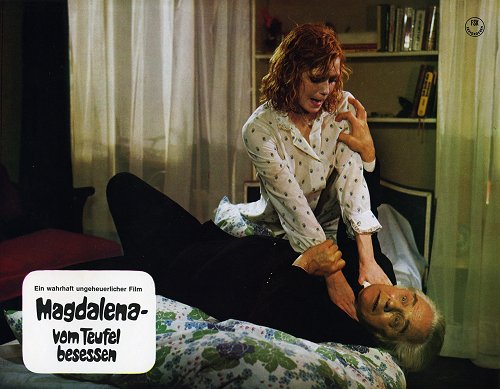 West Germany, 1974) aka Beyond The Darkness / Devil’s Female. Directed by “Michael Walter”. 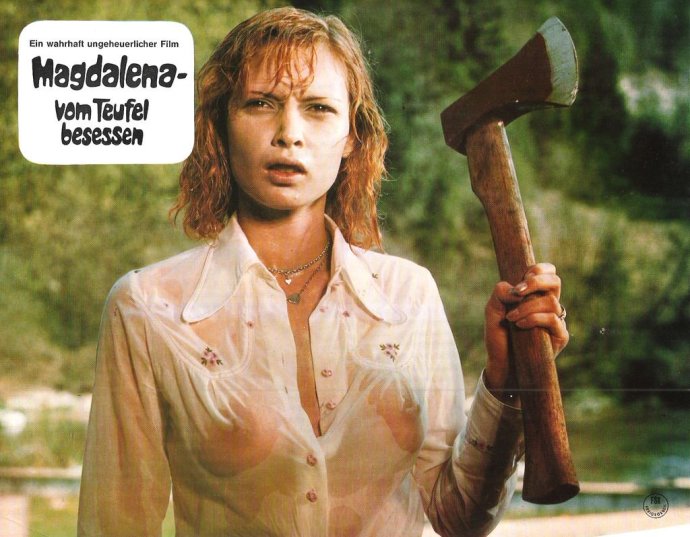 We’ve already surveyed Spaghetti Exorcist clones, but Italians were by no means the only ones trying to join the post-Blatty box office bonanza during the 1970s, Catholic countries proving to be predictably fertile soil for the Devil’s cinematic seeds. In Spain, Jess Franco did his bit with Lorna The Exorcist (1974) … Paul Naschy took on Father Karras’ mantle in the 1975 Juan Bosch effort Exorcismo… and Templars director Amando De Ossorio pitched in with Demon Witch Child the following year. In 1978 the long overdue French release of Lucio Fulci’s Don’t Torture A Duckling adopted the title Long Night Of Exorcism. Must try harder, France. By that point, Catholic southern Germany had already contributed an absolute cracker to the cycle with “Michael Walter”s Magdalena – Vom Teufel Besessen (1974). 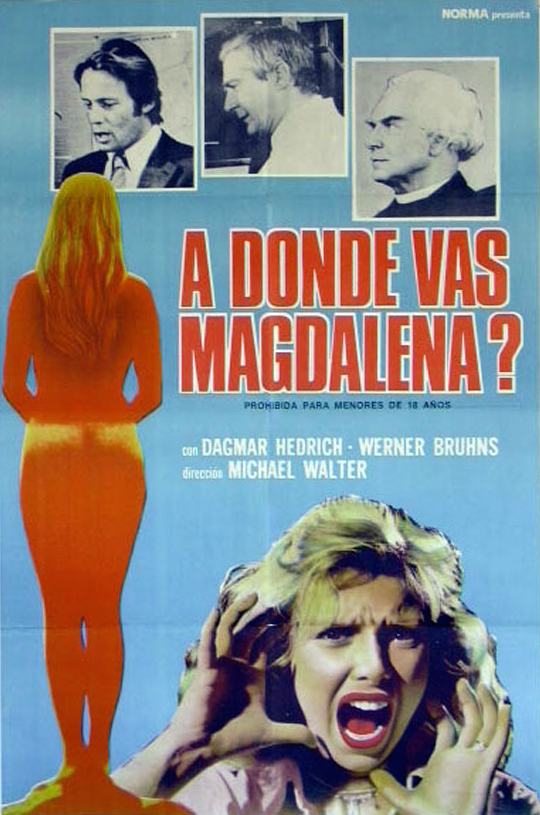 Walter, better known to his Mutti as Walter Boos, had hitherto laboured in that particular German specialty genre, the cautionary tale of curious German college girls (generally played by actresses… and I use the term advisedly… in their 20s and 30s) and their sexual misadventures. The title of Boos’ own What Parents Should Know (1973) tells you all you should know about the News Of The Screws-style cod moralising that justified these films’ shagtastic shenanigans. MPBTD represents a welcome respite from all this tit-and-ass tedium by throwing demonic possession into the sexploitive mix and true to form, the engaging Dagmar Hedrich was nearly forty (making Stockard Channing in Grease look positively pubertal) when she essayed the title role of troubled schoolgirl soul Magdalena Winter. 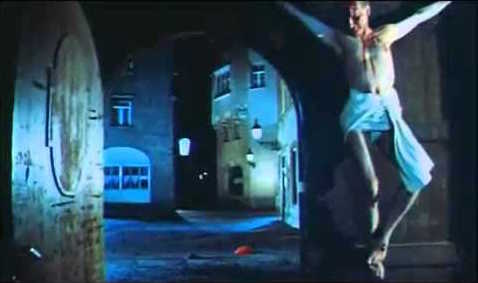 The film kicks off in the wee small hours of a beery Bavarian night before, at the end of which a hooker (her ensemble pitched somewhere between Pussy Cat Doll and New York Doll) discovers some hapless guy crucified on his own front door. The MO of his demise and tattoos found on him suggest that he was a Satanist who fell foul of like minded evil dudes. As he stirs on the mortuary slab, his grand daughter Magdalena starts undergoing seizures at her boarding school (each signalled by flies buzzing on the soundtrack), writhing around in agony and / or sexual ecstasy, foaming at the mouth and spitting out the expected blasphemous obscenities (though there’s a conspicuous absence of pea soup… very disappointing for a film with the word “Vom” in its original German title). Alfie the dog (he’s no Dickie but you can’t have everything) begins cowering and growling in her presence and up in the attic, there’s more rickety furniture flying around than at an MFI clearance sale (I know I’ve used that gag before but it’s one of my favourites… apologies to any readers who are too young to remember the shambles that was MFI). After a particularly epic mong attack during which Magdalena kicks in a sturdy door with her bare feet, a doctor is called in but says that none of this is anything to worry about. He changes his tune the next day, after she’s been told about her grandfather’s death and responds with the announcement that she “despises” the dead, before shinning up a wall and running away. Thumbing a lift, Magdalena breaks the arm of a driver who tries it on with her… which will, ironically, make him more rather than less likely to pester women for hand-jobs in future. Concerned teachers take her to see kindly old village priest Father Conrad (Rudolf Schundler from Suspiria!) to whom she expresses a desire to take Communion “but not in my mouth… down here in my pussy!” More tea, vicar? 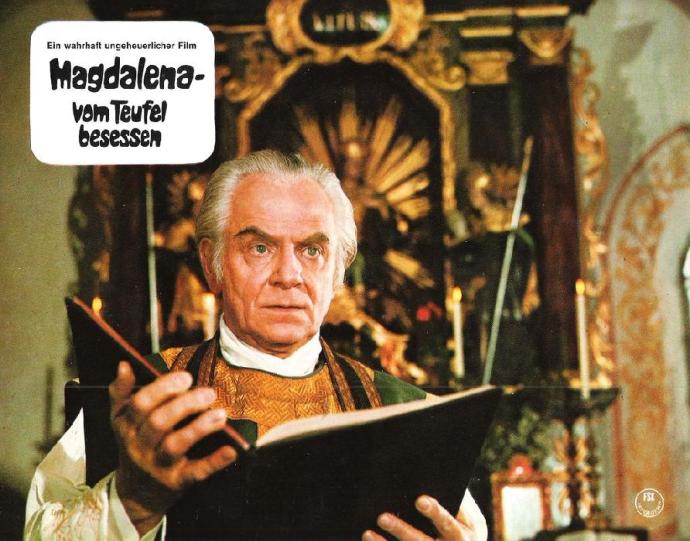 Professor Falk (Werner Bruhns) and Dr Stone (Michael Hinz) spirit Magdalena away to a country retreat, from which she’s soon absconding for more unbridled rumpy-pumpy. Attracted to a beer hall knees-up by flatulent oompah music (conclusive proof that the Devil doesn’t have all the best tunes) she prick teases two burly brothers until one stabs the other to death then adds insult to injury by disappearing (literally) before the winner can claim his prize. She’s soon trying the same tactics on the Prof and Dr Stone. “Surely you don’t believe in The Devil?” gasp Falk when Fr Conrad suggests exorcism. Damn silly question, really… I mean, is The Pope a Catholic? 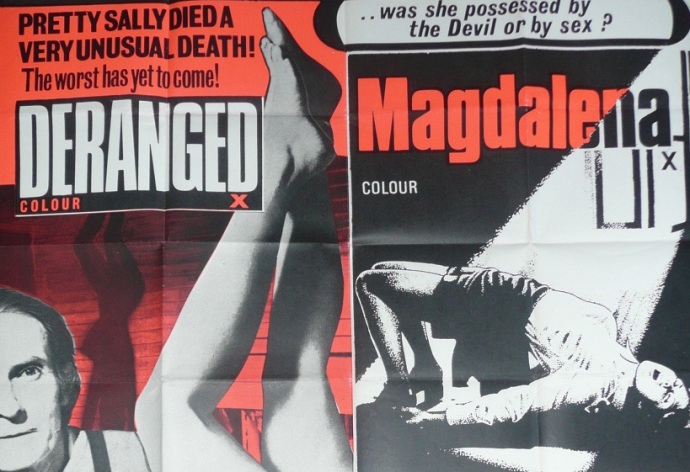 Falk is finally persuaded after Magdalena (having seemingly been fucked by some invisible entity or other) tries to stab him, bursts out of strait jacket, set a fire and starts threatening people with an axe. The “climactic” exorcism turns out to be a pretty light touch affair. Magdalena is browbeaten into reciting The Lord’s Prayer, at which point a joke shop snake jumps out of her mouth, is stamped on and disappears. “There are things between Heaven and Earth” pronounces the Prof, sagely as Magdalen and Doctor Stone wander off, arm in arm. That’s all, folks. 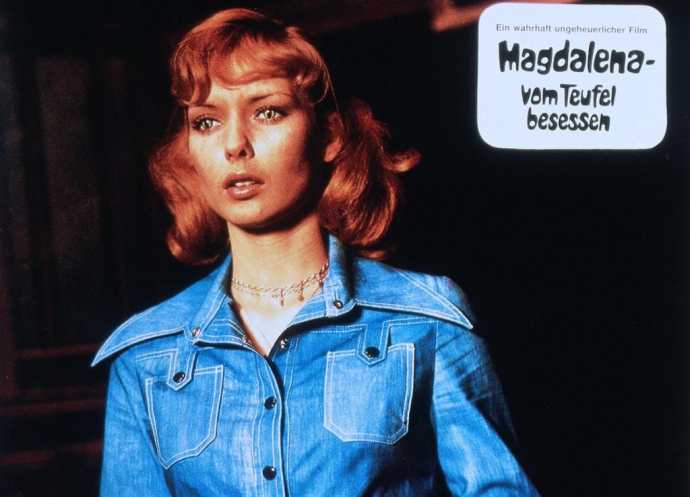 Dagmar Hedrich goes for it full throttle throughout and if there was any justice, she really would have got an Oscar for her performance as Magdalena. Instead, she never made another film. Perhaps she figured she’d be able to get by just fine on her old age pension…. 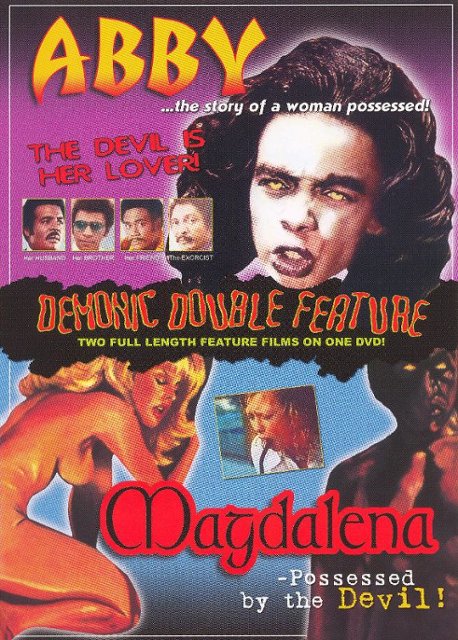 This is arguably the best among the legion of Exorcist clones and a superb exploitation film, full stop. How often do you find yourself watching one of these things and fast-forwarding through bothersome bits of exposition to get to the next outrage? There’s really never a dull moment in M-PBTD, it just flies by. Maybe it’s been cut? The version I saw clocked in at around the 90 minute mark but the packaging for this Super 8 release suggests a two hour (!) running time. How accurately were such listings, Super 8 collectors? 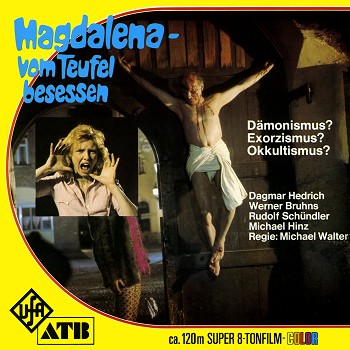 Let’s get one little thing straight (as the actress said to the bishop): a boarding school girl in Germany with an affinity for supernatural Phenomena and a strange connection with insects… and at one point she even has EEG wires strapped on her head? Makes you wonder if Dario Argento ever donned a shabby raincoat and went to see Magdalena – Possessed By The Devil.