Sex Dwarf, Isn’t It Nasty? THE BEAST IN HEAT Reviewed 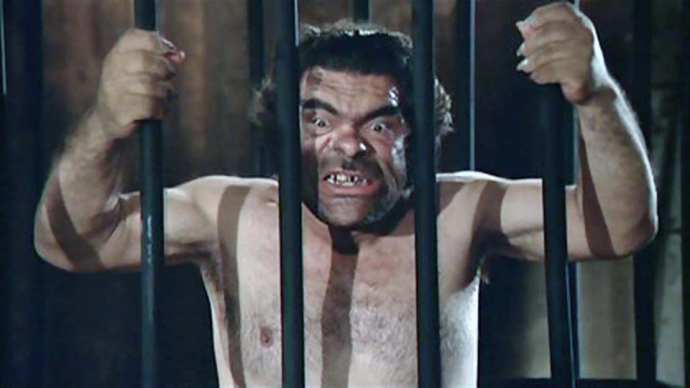 BD. Severin. Region Free. Unrated.
(“The World Blu-Ray Premiere Of The Most Bizarre Nazisploitation Shocker Ever!”, no less…)

“Don’t spit on the plate from which you eat your dinner”, John Morghen once told me and while that’s eminently sensible advice vis-a-vis basic culinary hygiene, he was actually responding to my enquiry as to how he felt about being typecast as a series of mentally unstable grotesques. Somebody else who probably thanked God for typecasting (if possibly for very little else) was Salvatore Baccaro (1932-1984). Talent spotted outside a Roman film studio, working as a fruit and veg vendor (a role he plays, fleetingly, in Dario Argento’s Deep Red, 1975), Sal was never likely to be nominated for a Rondo award, unless it was one for the closest physical resemblance to Rondo Hatton (both suffered from the disfiguring condition acromegaly). Baccaro’s brutish features and sawn-off, barrel-like physique earned him 65 roles, many of which turned on the old “beauty and the beast” chestnut, either with gently ironic intent (he beds the exquisite Edwige Fenech in Sergio Martino’s 1976 portmanteau effort Sex With A Smile) or to rather more sinister effect…

After appearances in, among others, Argento’s Five Days In Milan (1973), the 1974 Dick Randall monstrosity Frankenstein’s Castle Of Freaks (credited as “Boris Lugosi”, our boy played Ook The Neanderthal Man, above) then Jacopetti & Prosperi’s Mondo Candido (1975), Salvatore found his career-defining (though uncredited) role in Tinto Brass’s Salon Kitty (1976). Ramming home, with characteristic lack of subtlety, his message that the Nazis’ obsession with racial superiority made them infinitely more bestial than the “üntermensch” they so despised, Brass shows hookers for Hitler proving their loyalty to the Fuhrer by coupling with non-Aryan, disabled, deformed and otherwise “undesirable” prisoners. Sal features prominently as a randy retard. When I caught up with Salon Kitty courtesy of a University film society in the late ’70s, I counted more walk outs during this scene than for any other public screening of any film I’ve ever attended (though David Cronenberg’s Shivers ran it close).

Not everybody was so turned off, though. In 1977 (a proper annus mirabilis for Signor Baccaro, who also appeared in Luigi Zampa’s The Monster, Luciano Martino’s Erotic Exploits Of A Sexy Seducer and Joe D’Amato’s notorious Emanuelle In America), Sal was called upon to briefly rehash that Salon Kitty role in Bruno Mattei’s xerox of the Brass film, SS Girls. Later in the year producer Roberto Pérez Moreno decided, for reasons over which we can only speculate, to expand the spectacle of Sal as mutant Nazi sex machine to feature length in Luigi Batzella (as “Ivan Kathansky”)’s once-seen-never-forgotten “The Beast In Heat – Horrifing (Sic) Experiments Of SS Final Days”. Well, half feature length, anyway…

… footage from When The Bell Tolls, a partisan saga Batzella had directed (as “Paolo Solvay”) in 1970 was stitched in to provide some kind of context against which Salvatore (as “Sal Boris”… are you getting all this? I’ll be asking questions later) can spend the balance of the picture doing his inimitable thing, bonking any women unfortunate enough to be thrown into his cage (and sometimes eating their pubic hair), hamming it up in a Cosmo Smallpiece-like caricature of lust, mugging and smacking his lips into Batzella’s on-rushing zoom lens while all around him other overacting captives are sexually humiliated, tortured, castrated and fed to ravenous gerbils and guinea pigs, all of this presided over by sexy, mega-aphrodisiac wielding SS doctor Ellen Kratsch (Macha Magall, who’s also in Mattei’s SS Girls, not to mention Ken Dixon’s The Erotic Adventures Of Robinson Crusoe, 1975). 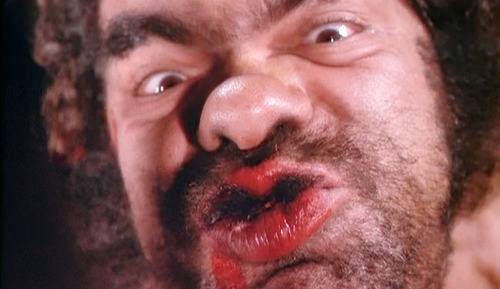 Dr K seems very, er, enthusiastic about her work. Whereas Sal’s role in the Brass and (to a somewhat lesser extent) Mattei films seemed to be to blur the lines between the supposed “subhumans” and the übermensch who were stealing themselves to have it off with them, here he seems to be Doc’s pride and joy, an… er, end in himself, though it’s difficult to see exactly how his retarded rutting is supposed to further the cause of  Aryan racial supremacy. Clearly, Fraulein Kratsch has taken her eye off the prize. As Bruce Lee advises a kung fu novice during the opening scenes of Enter The Dragon: “It is like a finger pointing the way to the moon… don’t concentrate on the finger or you will miss all that heavenly glory”. Dr Kratsch is missing out on a shitload of heavenly glory here, though she appears to be having a whale of a time, all the same.

When Batzella (who also edited this thing) finally manages to stitch the old and new footage together into some semblance of a climax, those partisans have very definite views on the Doc’s conduct. Not trusting in a malpractice hearing, they stuff her into Bonking Boris’ cage, exactly where we all knew she’d end up. Unfortunately the kill-joy guerillas shoot them both before the full measure of poetic justice can be meted out.

Severin’s mission to rehabilitate as many official “video nasties” as possible continues unabated. They’ve done a characteristically splendid job on The Beast In Heat, a movie that’s rarely been topped for tastelessness but whose almost palpable absurdity would make it very difficult for anyone to take too much offence at it, aside from opportunistic muck rakers trying to start moral panics during the early ’80.

In the featurette Nasty Nazi, Stephen Thrower, a dependably articulate commentator, struggles (as would anyone) to convey the tawdry ridiculousness of the whole affair and wonders how a dapper, urbane character such as Luigi Batzella (pictured above, right) could have been roped into it. I guess the answer is that he had bills to pay like everybody else. No doubt the same was true for The Beast’s OST composer Giuliano Sorgini, previously responsible for the sublime score to Jorge Grau’s masterly Living Dead At The Manchester Morgue (1974). Thrower suggests that TBIH was as much “inspired” by the dishonourable tradition of OTT Italian horror comics (“fumetti”) as by any cinematic antecedents which sets up an interesting feedback loop, given that such comic book fodder (see for instance the controversial case of IPC’s Action comic in the UK) often exists to feed a demand for rite of passage forbidden thrills from kids too young to sneak in and see adult-certified films. 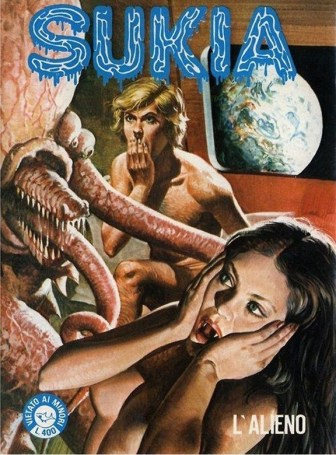 Of course you get a (French) trailer, plus Naomi Holwill’s exhaustive, alternately informative and amusing feature length SadicoNazista doc, Fascism On A Thread – The Strange Story of Nazisploitation Cinema. The aforementioned Giuliani Sorgini opens proceedings by declaring these films”the lowest of the low”. Other genre luminaries interviewed include directors Bruno Mattei, Sergio Garrone (SS Experiment Camp), Mario Caiano (Nazi Love Camp 27), Rino Di Silvestro (Deported Women Of The SS Special Section) and Liliana Cavani (who reveals that what worried Italian censors most about The Night Porter was the spectacle of Charlotte Rampling on top during sex). Night Porter writer Italo Moscati and Sergio D’Offizi (DP on Deported Women Of The SS Special Section) also have their say, along with actresses Melissa Longo (Salon Kitty and various French stabs at SadicoNazista) and Dyane Thorne (Ilsa herself… now an ordained minister!) plus her husband and collaborator Howard Maurer, along with commentators and academics including Mike Hostench from the Sitges Film Festival, Mikel J. Koven, Russ Hunter, Anthony Page, Kim Newman, Allan Bryce and the inevitable John Martin. Yep, it’s another winner from High Rising Productions.