“Martina’s getting out of the insane asylum. She’s a schizophrenic… a nymphomaniac… you’ll like her!”

Since the boy Freudstein’s Zine debut, various critical consensuses have mutated in a way that nobody could possibly have predicted. Terence Fisher, for example, has been unceremoniously dumped from the pantheon of Great Horror Directors, while lavish box sets and coffee table tomes are now devoted to the formerly despised likes of Andy Milligan, Al Adamson and Jess Franco. In fact the inexorable rise of Franco from pariah to fanzine favourite to filmmaker worthy of serious critical attention probably encapsulates this change (slide?) in popular and academic taste more neatly than anything else I’ve witnessed in the 35 years or so that I’ve been writing about this stuff. 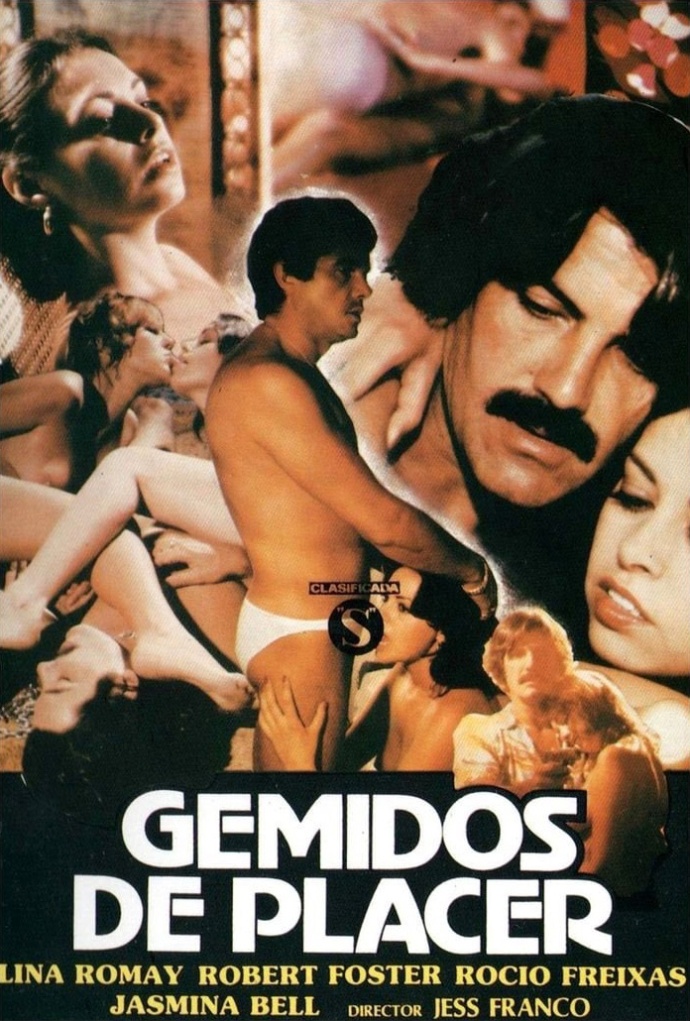 Severin continue their stalwart contributions to this alarming cultural phenomenon with a spanky new BD edition of JF’s 1982 effort Cries Of Pleasure (“Gemidos De Placer”), beautifully scanned in 4k from the original negative. Plot wise, there’s nothing much new going on here (stop me if you’ve heard this before but Antonio Mayans, Lina Romay and another couple of uninhibited floozies, plus an idiot savant flamenco guitarist, repair to an architectural folly on the Costa Del Sol for an interminable bonkathon, involving but not restricted to the inevitable Emmanuelle-patented wicker furniture) but the real novelty is in this one Franco attempts to emulate (sort of) Hitchcock’s experiment in Rope (1948) by constructing his picture as a collage of a very few long, long takes.

While this has the upside of eliminating some of the noodling passages and messier edits that disfigure certain other Franco productions, long passages of people having it off present their own challenges to the viewer’s attention span… especially when the sex is so palpably faked. The one brief glimpse we get of Mayans’ stauner (thanks to Rachael Dunnett for that one) is decidedly more Limp Bizkit than Led Zeppelin.

To ward off impending ennui, Franco manages to introduce significant plot twists at just about the right moments. Although the film’s titles suggest that this is an adaptation of De Sade (just for a change, eh Jess?) and there are nods throughout to the passionate philosophy of Donatien Alphonse François (“We belong to the chosen ones, to whom everything is allowed” … “Isn’t that wonderful, Julia? The throbbing and trembling pussy of somebody who’s about to die!”), Cries Of Pleasure is actually something more of a kinked-up take on Henri-Georges Clouzot’s überinfluential Les Diaboliques (1955). Although Mayans intrigues with various permutations of the lady libertines against each other… let’s just say that things might not work out exactly how he planned.

Franco’s frequently favoured DP Juan Soler doubles up here as a retarded handyman / guitarist who wanders in and out of the unfolding orgies, to which he often supplies a musical accompaniment (reminding me of certain scenes from Oshima’s Ai No Corrida… now there’s a truly Sadean film). This guy probably never ever learned to read or write so well, but he can play his guitar just like ringing a bell… remind you of anybody? The elitist, murderous swingers treat him with the contempt they consider appropriate, but we are privy to his internal monologues, including his memories of previous unspeakable atrocities, which makes for an interesting narrative device. An unreliable witness, he is abandoned by the surviving characters (“They’re strange people”, he ventures) as they head off in search of “unlimited debauchery”. Well, I ask you… are there any high profile precedents for a corpse (bearing signs of sexual trauma) turning up in somebody’s swimming pool without the owner of said pool facing serious legal consequences? Actually, now you mention it…

A tasty array of special features includes Stephen Thrower visiting various exotic Franco Locations in Portugal (and clearly having the time of his life), Donald Farmer’s 1993 video interview with Lina and (mostly) Jess, plus Thrower’s characteristically engaging discourse on the director’s time with Golden Films and Cries Of Pleasure in particular. All of these run over as continuing featurettes on Severin’s companion release, Franco’s Night Of Open Sex (1983, below).