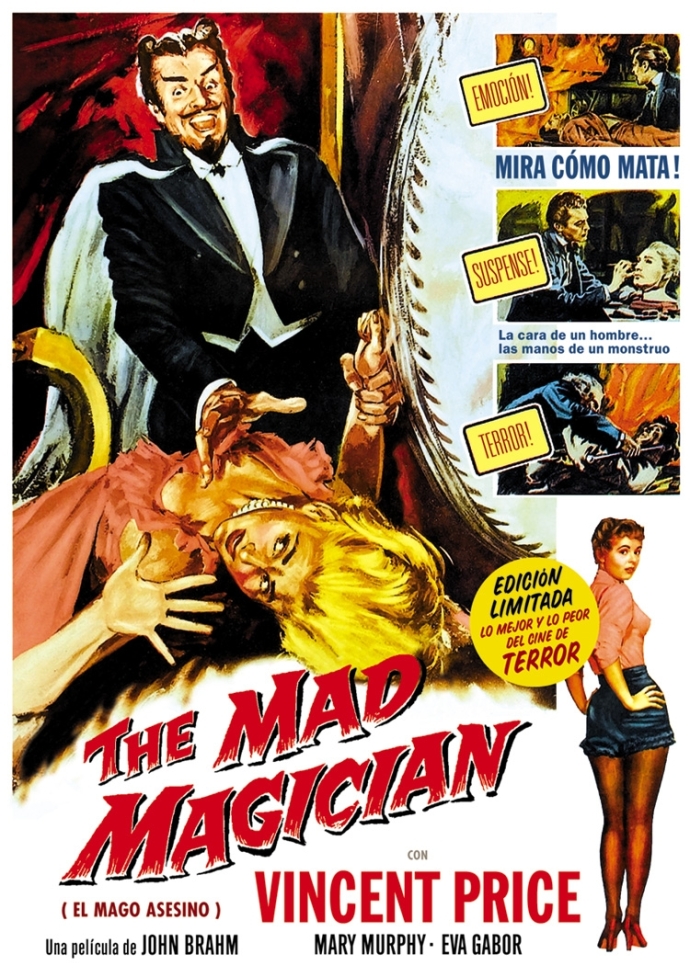 “I don’t want to miss your opening”, Police Lt Alan Bruce (Patrick O’Neal) tells cute Karen Lee (Mary Murphy) before her debut in a new stage production… and that’s a bit forward of him, if you ask me. And exactly what kind of a show is this, anyway? Actually it’s a magic show in which she’s the glamorous assistant to Gallico The Great (Don Gallico to his Mum), as played by Vincent Price. The show will climax with “The Lady And The Buzzsaw”, a variation on the old “sawing a woman in half” routine that GTG confidently expects to be his launchpad to a glittering Broadway run. Never mind the buzzsaw, Ross Ormond (Donald Randolph), Gallico’s killjoy boss in his day job at Illusions, Inc arrives with an injunction to stop this magical milestone being performed. Turns out that he’s got contractual dibs on anything his employees create and he’s saving the buzzsaw extravaganza for The Great Rinaldi (John Emery), a rival magician who’s been taking the plaudits for Don’s creations for years.

The next time Gallico encounters his boss, the latter adds insult to injury by reminding him how he stole his wife. Mad? This magician’s bloody furious and responds by turning a radical revamp of that buzzsaw gag on his tormentor, then stashing the severed head in a Gladstone bag. He disposes of Ormond’s body on a bonfire but when an unfortunate bag mix up leads to that severed noggin being delivered to the cops he masks up, assumes his victim’s identity and goes on the lam. He rents a room but as luck (and Crane Wilbur’s delightfully barmy screenplay) would have it, his busy body landlady, Alice Prentiss (Lenita Lane) is a  crime novelist whose most recent best seller, Murder Is A Must, turns on the notion that once somebody’s carried out their first murder, they’ll be obliged to commit more and more of them to cover their tracks. Sticking her nose in where it’s not wanted, she engineers a reunion between “Ormond” (and Gallico)’s duplicitous former wife Claire (Eva Gabor), setting off a chain of events which neatly confirms the thesis of her novel, as Don is obliged to bump off more people, don more masks and adopt more identities, with exponentially compounding complications. Think “The Talented Mr Ripley’s Believe It Or Not!” meets Man Of A Thousand Faces. 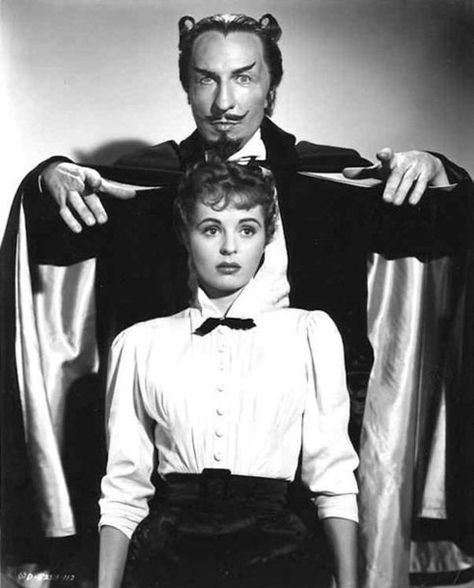 If Vincent Price’s career move from suave smoothy to Horror Icon (with those Corman collaborations, Phibes, Witchfinder General, et al to come) began in André De Toth’s House Of Wax (1953) it was sealed by this one, directed by John Brahm the following year … in fact Columbia were so keen to jump on Warner’s 3D bandwagon that they started shooting The Mad Magician before De Toth’s film was released. The stereoscopic gimmick isn’t even particularly well deployed. Instead of showcasing the shock / action / murder set pieces, it’s mostly frittered away on throwaway shots of playing cards, squirts of water and yo-yos being thrust in your face. Price, in stark contrast with all of these shenanigans, plays it admirably straight, though one might well speculate that he picked up his renowned subsequent hamming habit from John Emery’s ripe overperformance here as The Great Rinaldi.

This is great goofball fun, for maximum enjoyment of which I would recommend that you screen The Mad Magician in a double bill with Herschell Gordon Lewis’s completely crazed The Wizard Of Gore (1970)… you won’t believe your eyes!

Limited, as usual to 3,000 copies, Indicator’s The Mad Magician has been restored in 2K for its UK BD premiere and is presented in both two and three dimensional options. There’s a Jonathan Rigby commentary track as well as a featurette on ’50s cinematic 3D from archivist Tim Vincent and cinematographer Frank (Kubo and the Two Strings) Passingham for you to enjoy. As well as the expected trailer, image gallery and collector’s booklet (which I haven’t seen yet), you get not one but two cut-down Super 8 presentations of the film… and to put the tin hat on it, justifying the purchase price by themselves, a couple of stereoscopic shorts from the mighty Three Stooges, Spooks! and Pardon My Backfire (both 1953). Whaddya mean, you don’t dig The Stooges?!? College Boy, huh? If the spectacle of Mo, Larry and Shemp poking each other in the eye, sticking forks up each other’s noses, setting fire to each other’s pants, springing mouse traps on each other’s tongues and being attacked by a vampire bat that looks suspiciously like Curly Howard – all in glorious 3D – doesn’t significantly elevate your mood, then you’re already dead…