Hold on to your hats, ’cause this is a wild one… White Fire kicks off with a man (played by director Jean-Marie Pallardy) and woman being killed in a forest (we never find out exactly why) by paramilitary types, their two children rescued and adopted by a guy (Jess Hahn) in a dodgy pullover. Fast forward 20 years and the kids have grown into Ingrid (Belinda Mayne) and Boris ‘Bo’ Donnelly (Robert Ginty). She works at a diamond mine outside of Istanbul which is run like a prison camp by an oaf named Olaf (Gordon Mitchell), who summarily executes any sticky-fingered employees. Ingrid still manages to smuggle out plenty of gems for Bo to fence to interested parties. A criminal trollop named Sophia (Mirella Banti) and her gang are trying to muscle in on the Donnelly’s action (cue some rather lively fight scenes) and things are further complicated by the discovery of the legendary White Ice, a beautiful but radioactive diamond. In the ensuing kerfuffle, Ingrid is killed (with a blow pipe dart) during a bungled kidnap attempt. Bo picks up Olga (Diana Goodman) during a bar room punch-up. She bares a vague resemblance to Ingrid, so Bo persuades her to undergo plastic surgery to complete the illusion, in order that she may enter the diamond mine and help him half-inch that hot ice. About an hour into the proceedings, Pallardy wheels on Noah Barclay (Fred Williamson) and his own gang of desperadoes as further contenders for that diamond… why deny Fred his chance to beat the kitchen sink into this already overcrowded narrative? 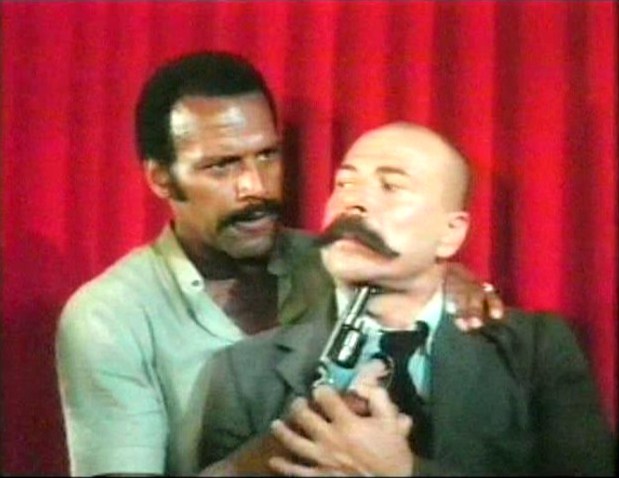 Admirers of well-proportioned narrative and thespian finesse are probably best advised to steer clear of White Fire but you should be sprinting rather than running to pick up a copy if your tastes run to brainless action, ludicrous dialogue, inept dubbing, gratuitous tit’n’ ass, ’80s fashion crimes (Gordon Mitchell is probably in his bloody eighties and should never been allowed anywhere near that red jump suit, below) and random outbreaks of violence involving aikido, flame throwers, bandsaw castrations, dynamite tossing and chainsaw duelling (the sound you’re currently hearing is that of James Ferman rotating in his grave at high velocity). Action fans certainly won’t consider themselves short changed by White Fire, though I reckon its running time could comfortably have been reduced by about 20 minutes.

If the aforementioned weren’t sufficiently outrageous for you, it’s worth pointing out that all of this sound and fury is arguably intended to divert your attention from the spectre of incest (I know, White Fire is the second Arrow release in succession where I’ve had cause to raise this taboo subject!) Bo seems very fond of his sister, punching out anybody who talks disrespectfully of her and shamelessly ogling her after ripping her towel off when she gets out of the shower. “Don’t look at me like that” she protests (a little half-heartedly), to which Bo responds: “You know, it’s a pity you’re my sister!” (?!?) You get the impression that he would soon have consummated his illicit lust, had the bad guys not bumped off Ingrid. At least he drew the line at necrophilia but subsequent scenes in which he grapples amorously with a character who’s been surgically transformed into his sister’s double (and is now played by the same actress) are pretty stomach churning.

If this is one of his mainstream efforts, Christ only knows what stuff went on in Pallardy’s earlier skin-flicks (I’m told that he made one called Erotic Confessions Of A Lumberjack, though that sounds just too good to be true). The director, a former male model, comes across in his bonus interview as a kind of low(er) rent Jess Franco and certainly share’s Franco’s eye for free, more bang for your buck locations. He talks about how the diverse cast was assembled to attract financing from various territories and it’s interesting to learn that his “human torch” stunt in the film’s prologue was every bit as misfiring and life threatening as it looks. Other bonus materials include interviews with Williamson (expounding the familiar Gospel about Fred according to Fred) and editor Bruno Zincone. The first pressing only comes with an illustrated collectors’ booklet featuring new writing on the film by Julian Grainger.

In Kat Ellinger’s commentary she takes issue with the whole concept of “so bad it’s good” Cinema, putting herself on a collision course with Williamson, who describes White Fire as “a bad film that’s good”. Careful Kat, you might be the fastest wordslinger in the West but in a no holds barred, dynamite tossing “jeet kune do with explosive arrow heads” showdown between you and The Hammer, there could be only one winner…

Credited as this film’s music supervisor we find no less eminent a personage than Deep Purple’s Jon Lord (ask your grandad), though the late Hammond-meister’s supervision seems to have extended no further than mounting the eponymous theme song on a loop… and White Fire is (cough, cough) no Burn (could have gone for Smoke On The Water but hey, way too easy!)